Cognitive Science for the Rest of us…

Cognitive Science for the Rest of us… 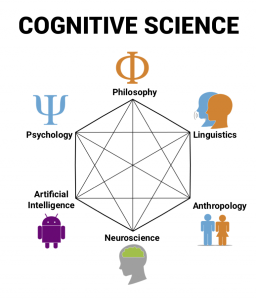 To understand how human learning really works and how we can improve the way we teach, we have to understand the human mind.
Published by Bernd Salewski
Basic Summary for Learning and Development Professionals
2018 eLearning online publication

Our understanding of how the human mind really works has deepened enormously in the last 16 years. Part of this new and groundbreaking knowledge has already begun to change the way we teach while also revealing new ideas and strategies for improvements in the fields of learning and development and instructional design as well. Behind this deep insight into the mechanics of learning is cognitive science.

Cognitive science is the interdisciplinary scientific study of the mind and its processes. It examines what cognition is, what it does and how it works. It includes research on intelligence and behaviour, especially focusing on how information is represented, processed and transformed within our nervous systems.
Cognitive science consists of multiple research disciplines including

Attention is the selection of important information. The human mind is bombarded with millions of stimuli and it must have a way of deciding which of this information to process. Attention is sometimes seen as a spotlight, meaning one can only shine the light on a particular set of information.

Knowledge and processing of language

The ability to learn and understand language is an extremely complex process. The study of language processing in cognitive science is closely tied to the field of linguistics. Research focus mostly on how knowledge of language can be acquired and used, and what precisely it consists of.

Cognitive scientists study memory just as psychologists do, but tend to focus in more on how memory bears on cognitive processes, and the interrelationship between cognition and memory.

Perception is the ability to take in information via the senses, and process it in some way. Vision and hearing are two dominant senses that allow us to perceive the environment. The study of haptic/tactile (sense of touch), olfactory (sense of smell), and gustatory (sense of taste) stimuli also fall into the domain of perception.
Action is taken to refer to the output of a system. In humans, this is accomplished through motor responses. Spatial planning and movement, speech production, and complex motor movements are all aspects of action.

Based on the Research in Cognitive Science, the creation of the Cognitive Load Theory (CLT) is the main influence on Learning and Development over the last years. Giving deep insights in the factors that influence the human learning process as well as perception, attention and new ways of persuasion.

During complex learning activities the amount of information and interactions that must be processed simultaneously can either under-load, or overload the fixed amount of working memory our learners possess. All elements must be processed before meaningful learning can continue.
People learn better when they can build on what they already understand. This is also known as existing schemas. The more a person has to learn in a shorter amount of time, the more difficult is it to process that information in working memory.

Another aspect involves the understanding how many discrete units of information can be retained in short-term memory before information loss occurs.

The Cognitive load theory has been designed to provide guidelines intended to assist in the presentation of information in a way that encourages learner activities that optimise intellectual performance.

John Sweller’s paper, “Implications of Cognitive Load Theory for Multimedia Learning” describes the human cognitive architecture, and the need to apply clear instructional design principles based on our knowledge of the brain and memory. Furthermore Sweller explains that in the absence of schemas, instructional guidance must provide a substitute or framework for learners to develop own schemas.

CLT provides a general framework for instructional designers allowing them to control the conditions of learning within most instructional materials. Furthermore it provides empirically based guidelines that help to decrease extraneous cognitive load during learning, and refocus that learner’s attention toward germane materials, increasing germane (schema related) cognitive load. This theory differentiates between three types of cognitive load on the fixed working memory (WM):

Intrinsic load is the “thinking” part of cognitive load theory.
For example, if one were learning the mechanics of 2+2 for the first time, one would have to think about the combination of two items with another two items. Essentially, one would have two items, then another item (3) and then another item (4). The amount of “thinking” or “intrinsic load” affects the learning capacity.

Another key component is the way in which the material is presented. Extraneous cognitive load is under the control of instructional designers.  This form of cognitive load is generated by the manner in which information is presented to learners (i.e., the design).  To illustrate an example of extraneous cognitive load, assume there are at least two possible ways to describe a geometric shape like a triangle.  An instructor could describe a triangle verbally, but to show a diagram of a triangle is much better because the learner does not have to deal with extraneous, unnecessary information.

Germane load is a third kind of cognitive load which is encouraged to be promoted.  Germane load is the load dedicated to the processing, construction and automation of schemas. While intrinsic load is generally thought to be fixed, instructional designers can manipulate extraneous and germane load. It is suggested that they limit extraneous load and promote germane load.

Instructional Design should focus to reduce extraneous cognitive load and increase germane cognitive load. This can be accomplished in various ways:

Also there are some well-documented effects that instructional designers have to consider applying the cognitive load theory. Just to name a few:

Coherence Effect
The Coherence Effect states that peoples learning is hindered when extraneous sound, pictures, and words are used in teaching. Many studies implicating that this is the case when using lengthy video recordings. Good Instructional Design should avoid using long and complex videos, distracting pictures or sounds.

Modality Effect
Another important example is the Modality Effect, stating that people learn better when words are presented as speech rather than onscreen text. Instructional Design should not rely on large amounts of onscreen text but use only short key points and condensed information. Adding a second delivery channel with non-redundant spoken narration.

Expertise Reversal Effect
The expertise reversal effect, based on scientific research, is that a person’s level of prior knowledge greatly influences the effectiveness of learning materials. So that instructional approaches that are beneficial for beginning learners are often ineffective or even detrimental for advanced learners.
We understand the limitations of working memory make it necessary to avoid overloading it. But here’s the catch: what induces cognitive load in a novice is different than what induces cognitive load in an expert.

For example, novices in a subject need extra instructional guidance, like demonstrations of how to work through a problem or task or replacing text with a voice over to avoid split attention. But these types of approaches are either ineffective for advanced learners or even worse, they may have the reverse effect and interfere with learning.

Several studies demonstrated that for advanced learners, processing the type of redundant information presented to a novice, could induce unnecessary cognitive load and distract the expert from the new material to be learned.

This is because advanced learners have knowledge structures (existing schemas) organised for efficiency and effectiveness in the real world. When they encounter too much instructional guidance, they have to stop to integrate and cross-reference this redundant material with their available knowledge structures, which uses up valuable cognitive resources and generates cognitive overload.

Design Strategies to avoid the expertise reversal effect
In order to avoid the expertise reversal effect, instructional designers need to ensure that materials can be dynamically adapted to the cognitive characteristics of the learner. Experts in a domain shouldn’t have to process information extraneous to their learning. Instead, they should be able to leverage and take advantage of their broad knowledge base. Here are some ways you can design for this:

Novice learners need a more structured learning experience and as they build their skills and knowledge, they will benefit from a more open learning environment. The bottom line is this: when designing for a broad audience, a fixed and one-size-fits-all approach won’t suffice. An integrated learning experience with multiple entrance levels is necessary.

To build successful instructional designs based on cognitive science and applying CLT incorporates many more principles. For example the right use of typography and colors, using avatars, animation complexity, chunking, content bounding, the understanding of different attention spans in different generations and the use of cognitive templates to structure content.

Cognitive Science, Cognitive Load Theory and the application of cognitive science principles to instructional design opens a new path to highly effective learning. With this in mind we have to consider another effect that influences the outcome of our work often and in unexpected ways:

According to psychiatrist and philosopher Franz Fanon sometimes people hold a core belief that is very strong. When they are presented with evidence that works against that belief, the new evidence cannot be accepted. It would create a feeling that is extremely uncomfortable, called cognitive dissonance. And because it is so important to protect the core belief, they will rationalise, ignore and even deny anything that doesn’t fit in with the core belief…